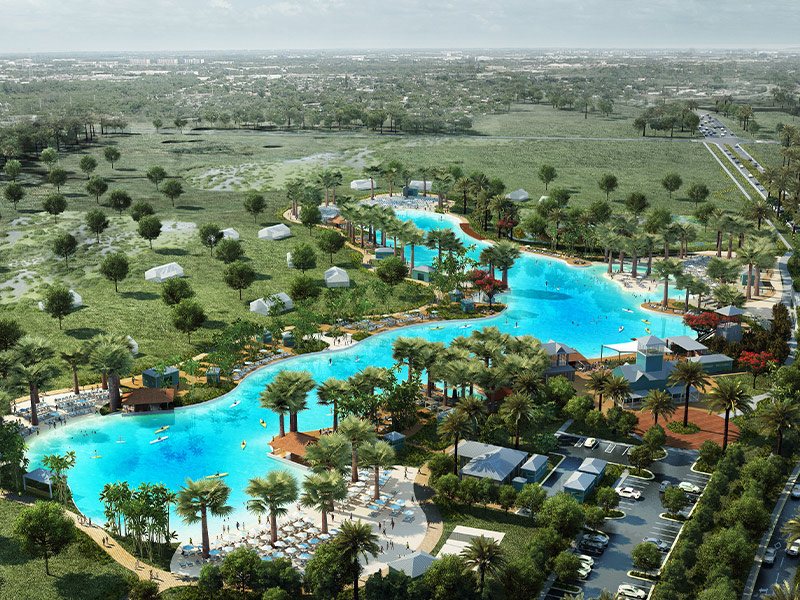 In 2019, Metro Development Group – one of the Southeast region’s leading developers – officially introduced a game-changer in the real estate industry when it opened the nation’s first Crystal Lagoons amenity in its community of Epperson. Never before had a master-planned community in the US been built around a man-made lagoon. However, being the first brought many obstacles and challenges. Before the lagoon could open, Metro found itself on the defensive (following permitting issues and multiple delays in construction), which required a tremendous amount of reputation management locally (in addition to increased community relations efforts) and resulted in a strictly reactive public relations approach.

Aqua knew through proactive public relations efforts, Metro could extend its coverage far beyond Florida, increase investors and home sales in the cutting-edge community and ultimately change the way buyers view “waterfront property” all to establish Metro as one of the nation’s most premier developers of master-planned community in the world.  To do so, it would need to shift its client focus from reacting to media requests and instead create a robust national Public Relations plan to introduce lagoons to US homebuyers and sell a “lagoon lifestyle” that had never been available before (think crystal clear water, a swim-up bar, cabanas, tiki huts, an event plaza, paddleboards, an inflatable obstacle course, giant slide and more).

Primary: Family-friendly homebuyers 35 and older with an annual household of $60,000+ as well as multigenerational families, including grandparents, and individuals focused on health and sustainability – located in inland markets or within proximity to “waterfront” properties outside of their price range.

While fielding on-going media and resident questions related to the lagoon’s delayed opening and assisting Metro with local media events surrounding projects at other Metro communities, Aqua got to work devising an expert public relations plan.

In addition to national media, the plan would target consumers in Northeast and Midwest markets as well as those from where homeowners in Epperson had historically relocated from. It would take into account seasonality, with a heightened efforts ahead of fall months during which American’s typically move, summer months when those who are landlocked might consider lagoon living and winter months during which those in colder climates would likely be dreaming of Florida.

Pitches would focus on not only promoting the lagoon, but also the other cutting edge technologies at Epperson and additional Metro communities including solar powered lights, an exclusive high-speed internet service known as ULTRAFi and innovative partnerships with world-renowned healthcare providers bringing health into the home.

Additional efforts would circle around obtaining recognition for Metro and its staff through the achievement of industry and general business awards on both a regional and national level.

The team earned hundreds of mentions with an overall publicity value media surpassing $1 million, reaching an audience of more than 380 million, culminating in a two-day CNBC shoot with Real Estate Correspondent Diana Olick and a national segment focused on emerging real estate trends and including information about home sales, why and how lagoon communities are attracting homebuyers, the technology behind the lagoon itself and what might attract an investor to a project such as this.

Today, the lagoon is the epicenter of the community which is one of the fastest growing in the region, having recently celebrated its 750th home sale in three years (with 4000+ homes planned), and was named one of the top four master-planned communities in the Tampa area by RCLCO.

In a highly competitive field, Metro Development Group and its Metro Places communities amassed nine 2019 Tampa Bay Builders Association Awards of Excellence (including the coveted “Master Planned Community of the Year”) held annually to recognize companies and individuals who exhibit excellence in the area’s building industry.

Metro Development Group is currently developing multiple lagoons in other communities throughout Florida in some of the most sought-after, inland destinations.